The Cupcake Club: Sugar and Spice 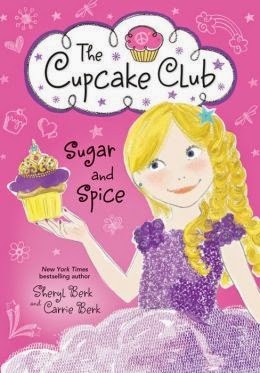 Summary:
The gang of the Cupcake Club is back!! In this latest adventure, bullies are taught a lesson in humility, and someone enters a beauty pagent!

Who knew that painting a huge canvas for art class would cause so much trouble?! Certainly not Lexie. However, when her overly large work of art collides with school snob, Meredith, Lexie becomes the target of Meredith's scorn. Instead of just letting it go, Meredith decides revenge should come with going after Lexie's boyfriend. As if constantly putting her down wasn't enough. Well, the girls of Peace, Love, and Cupcakes have decided they are going to teach the school hotshot a lesson, or two.

When the girls learn that Meredith has entered the Miss New England Shooting Starzpagent, they decide someone needs to run against her- and win. Lexie gets voted when they learn she can sing. So, a reluctant Lexie enters. Competition day isn't a smooth one. Some contestants soar, while others sink. And some people see stars.

Lexie isn't the only one facing down her insecurities with rivals. The girls of Peace, Love, and Cupcakes also go head-to-head with their rival competition when both vie for the job of baking for the pageant. Will the girls claim victory this time? Who's impressive cupcake concoction will be the winner?

Girls will especially love this series. The Cupcake Club is a fun, creative, spunky series that I enjoy reading! The characters are fun, the chapters aren't long, The stories are fun and relateable for all ages. The books in The Cupcake Club are great summer reads! Readers will have fun reading the books and getting to know all the girls. I look forward to each book!

Email ThisBlogThis!Share to TwitterShare to FacebookShare to Pinterest
Labels: Ages 9 -12

Pseudonymous Bocsh, the author behind the delightful Secret Series, is back with a brand new series!!! Get ready to meet new characters, revisit some from the Secret Series, and go on more wild and crazy adventures! 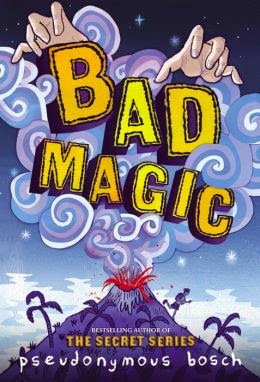 Summary:
Clayton is being framed! After someone paints something from his journal onto a school wall, Clayton is kicked out of school. The only thing that can save him is to attend a camp for troubled kids. His parents agree (which is a rare occasion) on The Earth Ranch Camp. However, when Clayton gets there, he quickly learns all is not what it appears to be. One giveaway is the talking llama who greets him. Then there's the whole mystery of a ghost in the old library. Clayton has quite an adventure on his hands. But what does magic (something he wrote off years before), his long missing brother, and William Shakespeare have to do with it?

Earth Ranch camp is far from your usual camp designed to whip kids into shape. It was fun navigating the camp with Clayton, and seeing all the oddities for the first time. Until the very end of the book, you don't really know what's going on. You just know that something is going on.

As I mentioned, some favorites from the Secret Series make appearances. Clayton's missing brother is non other than Max- Ernest. One of the camp figures is also from the previous series. There will be several names you'll read and recognize, like Cass and Price.

Pseudonymous has created another memorizing world to get lost in. From the camp's island home, to the people there, to the mysterious girl/ghost in the abandoned library window, readers will not lack for enticements to keep turning the pages. The role magic plays isn't a dark one, but one where imagination steps in where reality stops.

Bad Magic was a fun read that kept me wanting to see what was going to happen next. I do think readers may want to be 10, or older, for reading. Some references and words may not be understood by younger readers.
Posted by kids book korner at 9:00 AM No comments: 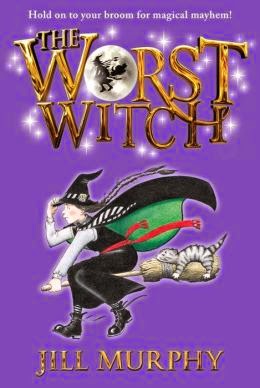 The Worst Witch
By: Jill Murphy
96 Pages
Ages: 8-12
Summary:
Mildred Hubble is starting her first year at Miss Cackle’s Academy for Witches — and making a mess of it! She can’t ride her broomstick without crashing, she’s always getting her spells mixed up, and worst of all, the teacher’s pet, Ethel, has just become her sworn enemy. -- publisher

Originally released in 1974, The Worst Witch is being re-released for a new generation to discover. Young readers are bound to fall in love with little Mildred Hubble. This poor witch-in-training is the student with her heart in the right place, but nothing else. She's the one who will crash into things while learning to fly on her broom, fixing her broken broom with a pile of sticky tape and glue, and is afraid of the dark (ssshhh, if you don't tell, I won't.).

In this first installment of this delightful character's series, Mildred is the recipient of a kitten. The time has come for all the first year students to get their assigned kitten who will ride on the brooms with their owners. Instead of getting the typical black one, Mildred is given a tabby one. And worse off, yet, the poor kitty isn't taking to flying on a broomstick too well.

Everything comes to a head during her class's formation presentation at the annual Halloween festivities. Mildred's has embarrassed her class by causing a crash landing (not her fault, though). Poor Mildred is so upset, she decides to taker her tabby cat and run away. However, while walking down the mountain, she stumbles across a group of witches. Witches who are plotting to place a spell over everyone at the school so they can control it. Now it's up to Mildred to save the day.

This book was fun to read. Mildred is a cute character who is fun to read. I can relate to being that child who had good intentions, but would somehow, someway mess things up. I think fellow readers will enjoy her, as well. I look forward to reading more adventures of Mildred.
Posted by kids book korner at 9:00 AM No comments: 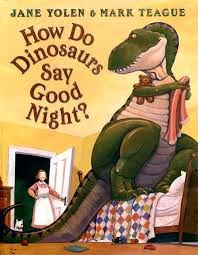 Many times I read this at storytime. A really great going to bed book. You cannot go wrong. Plus it rhymes, which is always fun.

My favorite to read aloud of the Dinosaur series. As you may have guessed, this one is all about table manners. 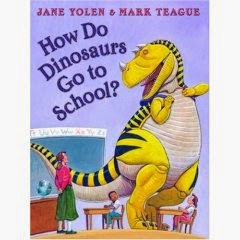 A very fun story about how to behave in the classroom.

A little fact about this series: A different dinosaur is featured on each page, and the dinosaur's name is hidden somewhere in the illustration. It's really fun for kids to look for it on each page.


Posted by kids book korner at 9:08 PM No comments: 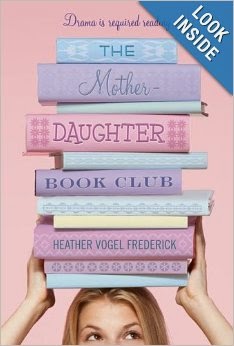 Even if Megan would rather be at the mall, Cassidy is late for hockey practice, Emma's already read every book in existence, and Jess is missing her mother too much to care, the new book club is scheduled to meet every month.
But what begins as a mom-imposed ritual of reading Little Women soon helps four unlikely friends navigate the drama of middle school. From stolen journals to secret crushes, to a fashion-fiasco first dance, the girls are up to their Wellie boots in drama. They can't help but wonder: what would Jo March do?
Acclaimed author Heather Vogel Frederick will delight daughters of all ages in a novel about the fabulousness of fiction, family, and friendship.

I really loved this book. I couldn't put it down, and ended up reading it in about 3 hours. I think there's something for everyone represented in this story. There are four very different main characters, yet each one has similarities with one of the March sisters from Little Women. As a kid, I read Little Women and really loved it, and have read it again as a adult and it's even better. It would be really fun to read Little Women, then read this book. And it's the start of a series! My verdict- read this book. You won't regret it!

Posted by kids book korner at 9:07 PM No comments: 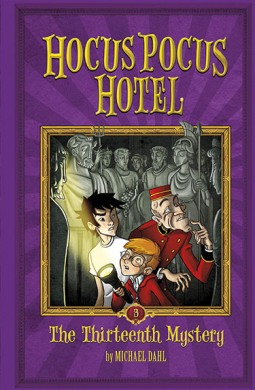 Summary:
Ty and Charlie must find their beloved friend, Brack. He's gone missing and no one knows where he is. They do know, however, that he never left the hotel. Where could the famous former magician be in a hotel built by magicians? And what do priceless statues of Greek gods and goddesses have to do with it?

Welcome to the third book in the wonderfully enchanted Hocus Pocus Hotel series. In The Thirteenth Mystery, Ty and Charlie need to find their missing friend, Brack. If he isn't found within 24 hours, he risks losing the hotel he loves dearly to rival magician, Theopolis. No one knows where Brack is. The only thing they do know is that mo security camera footage shows him leaving the hotel. Where could he be? Does the the clump of read hair found on Brack's apartment floor have anything to do it with his disappearance? Also, 50 years ago, priceless statues of gods and goddesses were delivered to the hotel. What was once long forgotten has now been remembered, but by who? What lengths are they willing to go to in order to get them back?

I have loved this series from the very beginning! The books are fun, lighthearted, and absolutely enchanting. Ty and Charlie are a great team and the setting of a hotel built for, and by magicians, mean endless possibilities. The Thirteenth Mystery was every bit as good as other 2 books in this series. Whereas the previous books were broken up into 2 stories each, this time one plot unfolds. However, within that one plot, several other stories emerge. In this case, priceless Greek statues of gods and goddesses are found within the hotel. They had been delivered 50 years ago, but forgotten. Now one is stolen. Who would want to steal them, why, and how were they able to take one of the heavy stone statues?
Posted by kids book korner at 9:00 AM No comments: 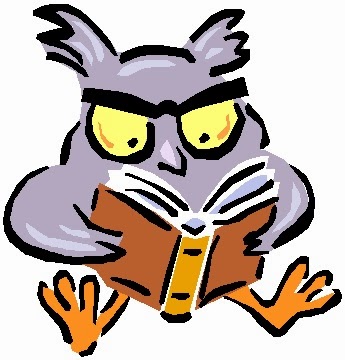 kids book korner
A blog dedicated to children of all ages who love books. We'll have suggestions, recommendations, & reviews for parents & kids. We hope you enjoy!! 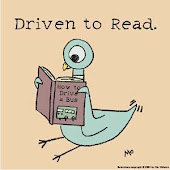 Let a book take you wherever your imagination wants to go 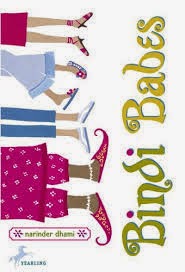 For Parents Who Love To Read 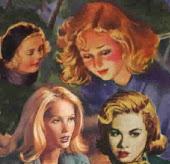